I don't know how to go about processing the time I spent at Oxford. There's simply too much there that needs it. I couldn't keep up with the experience while in its midst, because the time went too fast and it was too full--and now everything has piled up and I don't know what to do about it.

In many ways it would be easiest to just look forward--to turn my back on the time at Oxford and plow into the next thing: I've become pretty good at getting joy in the days I'm living in, in the days directly coming. I'm not worried that I'm going to experience some kind of depression or dissatisfaction with life upon leaving Oxford. But the ease with which I'm pretty sure I could transition actually scares part of me, the part of me that really wants the Oxford semester to matter in some tangible way: the part of me that can't stand the thought that Oxford was just a semester, a semester that was wonderful but must now be left behind.

One of my Oxonian friends voiced a similar worry. He likened the experience of our semester at Oxford to that of a first semester at college--it's wonderful, but when you go back home for Christmas it all seems like a dream. Returning in the Spring is what solidifies the experience and makes it real. The only problem is, for most of the SCIO Michaelmas 2015 cohort there will be no return in the Spring.

I feel different. I feel like I've changed. My mind, at least, seems stretched in new ways. But will that last? When I go through intense times of intellectual thought, study, and work, my mind feels agile and like it sees so much more than I usually do. But I typically find that afterwards the feeling fades--once I hit break, whether Winter or Summer, my mind seems to quickly lose its agility and sharp observance. Will it be different this time? Even if the mind snaps most of the way back into place, does it retain at least some of its stretch?

And of course there are other ways I feel changed--anytime you enter into relationship, allow yourself to love and be loved, you change. But how hard the goodbyes hit me surprised me, immensely. As a TCK I've grown up very familiar with goodbyes, and I've never found them overly difficult. Sure, some hit you harder than others: the hardest I've had so far were my high school goodbyes--but with those the timing was so right, and the closure had all taken place.

With these ones, apparently it hadn't. Before the actual goodbyes, I never thought that they would be harder than any others I've had to say--usually I take great comfort in my belief in the reality of the New Heavens and the New Earth, and I make do. But strings of love had attached themselves somewhere in my heart, deeper than I had thought.

Sure, I knew I would miss the city--I already had missed the city after only visiting it for a week. Now? I knew leaving it would stink, but at the end of the day, it's a location. And people always trump location, at least for me. (Though gosh, what a location.)

But the people, the community...how to explain it? I've had plenty of experiences of close community--I already knew it was one of the things that most mattered to me. Admittedly, this was probably the closest and densest community I'd ever been a part of (if you look at the number of people per square feet I lived with, that is)--but still. I didn't (and don't) feel particularly more known by them than my friends in other places (I've been blessed with some incredible friendships). And feeling known is a pretty big deal for me.

I've been thinking about it a good bit and will continue to do so. For honestly I still don't really have a clue what the state of my feelings is regarding these people, or why it's that way. Understanding why any of us feel about others the way we do can often be hard, but how I apparently feel about these people has confused me regarding relationships on a whole new level (perhaps).

I walked group after group to the bus stop, hugged people one by one and watched them disappear up the steps, not knowing if I would ever see them again. Each one pulled on my heartstrings a little more, and what made it worse is that the last couple of goodbyes were to my closest friends. I lost it with a force I did not anticipate and which still utterly bewilders me despite that the memory still brings me close to tears. (As a side note: despite being in such a state, I could not miss the humor of all these young American students at a British bus stop, losing it while reserved Brits looked on in shock.)

The week after, I remained in Oxford. Everywhere I walked, memories from the semester played and replayed in my mind as I tried to make sense of it all. I've relived a lot of them intentionally and intensely, hoping that by doing so it in some way helps me process through and retain them. But who knows if it actually helps?

I feel different. I believe I am different. But I doubt anyone but the closest observers could pinpoint where and how.

I'm scared of going back (whether to school, or old relationships) and people saying "you're just the same!" or "Good old Thani!" and acting like I was never gone, like I never experienced something important that I did not experience with them--just as they experienced something important that they did not experience with me. Or of people asking me about Oxford, and being satisfied with a couple of sentences, or even an hour or two.

I'm always scared of it.

One of my wise brothers once said, "we're all always changing, and we're all always the same." And it's very true, and it's the combination of the two that I think brings the most comfort.

But when it's time for a transition like this one, there's a large part of me (probably the very egotistical, self-centered part) that screams "it mattered! I'm different! It mattered!"

And part of me can't help but wonder (even though I ultimately believe this doubt to be a lie) if it really did matter, other than for me, God, and a bunch of people I have no idea if I'll ever see again (at least in this life).

Thought of these people, of this city, still quickly makes me ache. I know that will lessen with time. A lot of me doesn't want it to. And yet the part that thinks a little more clearly knows it must, or my Oxford semester will never settle into its proper niche in my life and being. 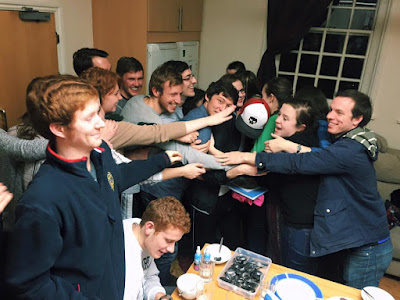