The Jesus Fast: A Response 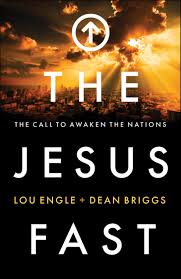 A call to fast by a one of the great fasters of our age. Lou Engle has given his life to fasting and releasing the grace of fasting to younger generations -- raising a cry regarding the power of, and need for, extended corporate fasting. You can't read his books or hear him speak and not know that this man believes that fasting shapes history.

It convicts me and challenges me in difficult ways. In part, of course, because nobody really likes fasting. It's really hard. And Lou pushes for forty day fasts in particular -- the hardest of all. But I've tasted of the fruit of fasting myself, and know there's a lot to gain here (though at this point I'd say I've still had more rather pointless fasts than fruitful fasts -- I'm still learning much).

But that's the smaller way in which it challenges me. The harder has to do with the part of shaping history. I grew up thinking about Christianity as largely an individual affair -- a faith centered around changing individuals. Individuals in community, yes, but still a faith and a God primarily concerned with the one -- not with nations and eras and cultures. God has set to work on my thinking in this regard over the last year and a half in particular (and my Dad played a large role in my changing on this), and now I tend to take thinking that God cares about shaping these huge parts of life as a granted (not losing that he cares about the individual, of course -- these are two sides of the same coin).

However, it still tends to make me feel tiny and fills me with the need to run to God and jump in his lap -- the good kind of fear of the Lord? This is the stuff of prophecies, visions and dreams, angels warring in the heavens, symbols and signs and times -- all the stuff in the Bible that makes me the most uncomfortable and feel the most out of my depth.

And Lou does not shy away from exegetical work on movements of history. He proclaims with boldness how certain corporate fasts led to certain key changes and happenings in government and other large spheres. And all that I've seen and been taught about the difficulty of knowing immediately causes me to shrink back and tremble when I hear him make some of these claims.

Yet I'll tell you I wholeheartedly agree that fasting can bring great change, that God still speaks through visions and dreams, that angelic beings exist. And so it is that here I find the great challenge -- to stand up and own the implications of my own beliefs. I do not believe that necessitates that I agree with every exegetical claim that Lou makes, but it does necessitate that I wrestle with them and engage with them and move to fast at times.

What must it have been like for Peter to stand up on the day of pentecost and connect the events that took place to Joel's prophecy? To declare, "this is that"? I'm not sure I would have seen the connection at the time, as I don't entirely see the connection now, but I do believe he was right.

What would it be like, to have it said of you, like it was said of the sons of Issachar, that they were men who understood the times and knew what Israel should do? (1 Chronicles 12:32)

This (interpreting the times) is not something to be done willy-nillie. And I don't believe it's something that can be done without the wisdom and insight of God. But hopefully our longing for understanding will drive us, via the fear of the Lord, deeper into intimacy with him.
Posted by scribbler at 10:10:00 AM